Thursday, 21 November 2002 (http://www.government.bg/English/PressOffice/News/2002-11-12/905.html):
"Balkan Air Tour becomes national flag carrier
Transport Minister Plamen Petrov issued an order designating Balkan Air Tour national flag carrier. For the time being Balkan Air Tour is to be the national air carrier for services for which there are intergovernmental agreements making it possible for them to be performed by more than one air carrier. Bulgaria has such agreements with France, Germany, the UK, Northern Ireland and the United Arab Emirates.
A procedure has been opened for the issuing of operation certificates to Balkan Air Tour by the aviation administrations of these countries for performing regular services to the coordinated destinations.
Today, a meeting of experts was held at the Ministry of Finance to discuss the business plan submitted by Balkan Air Tour.
The management of Balkan Air Tours also met representatives of Lufthansa Technik at which an agreement was reached on the terms for transferring the Boeing 737-300 aircraft used by Balkan Airlines declared bankrupt last week."


Balkan Air Tours changed its name to Bulgaria Air in March 2003. By June 2003 a Boeing 737-500, leased from Lufthansa, was reported operating with Bulgaria@Air.BG titles. 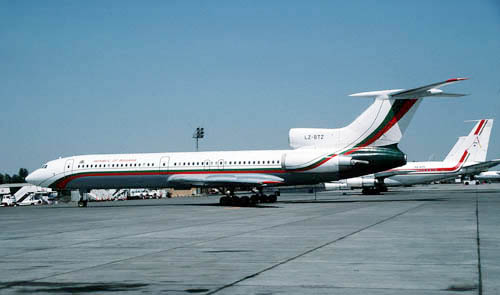 Tupolev Tu-154M LZ-BTZ is operated with "Republic of Bulgaria"- titles and was photographed by me at Sharjah on April 26th 2000.