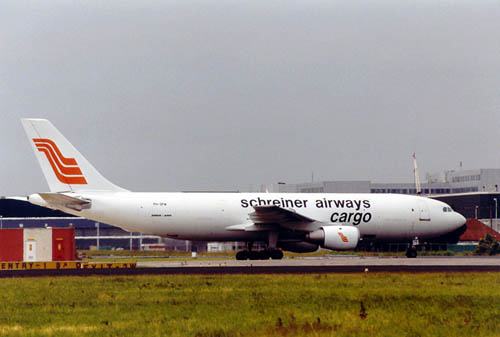 Schreiner Airways Cargo started operations in 1999 on behalf of KLM, operating 3 Airbus A300B4-200(F) on intra-European routes. KLM had a long tradition of having other carriers operating these services, feeding the Amsterdam hub as well as connecting on inbound flights. In the past we saw Air Bridge Carriers with its Vickers 953C Merchantman, Fred Olsen operating its fleet of Lockheed L.188 Electra's, Lockheed L-100 Hercules aircraft from diverse operators such as Southern Air Transport, Schreiner and NWT Air and more recently the impressive Short SC.5 Belfast of HeavyLift as well as their Airbus A300F.
By 2001 dark clouds were forming over these operations; due negative market developments it was announced in the spring of 2001 that 2 of the 3 A300s were to be disposed of. And by the end of 2001 KLM announced the termination of the contract with Schreiner Airways.
TNT Express replaced Schreiner Cargo in the cargo Europe role, mainly operating from Luik, Belgium (again with Airbus A300s); only a few flights actually operated into Amsterdam, the rest of the cargo was trucked, to & from Luik.
Schreiner Airways is a Dutch company of long tradition (founded in 1945) and continued its operations in many other fields of aviation.

Sources:
Fleet info: JP Airline Fleets 2000
"A Decade of Prop Supremacy" in Propliner magazine no80 (1990), by Jan Koppen and Michael Prophet.
Various news items on the Internet and in Scramble magazine.