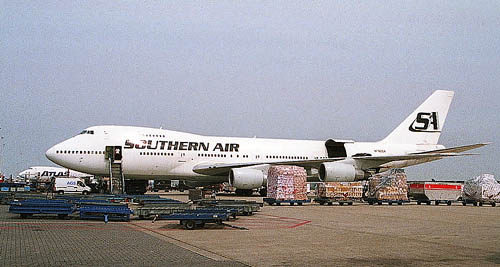 During January 2003 news reached me that all Southern's 747s had been stored and unable to resume operations as some engines had been removed by parties with a financial interest; apparently bills hadn't been paid and Southern had filed for Chapter 11.
GECAS refused comment and Southern I could not reach on the phone. I found no reference on the internet to Southern ceasing operations.
The events are quite sad as Southern Air Transport ceased operations before: on 25Sep98, after having been founded in 1947 (it was then based in Miami,FL). But Southern Air Inc. had no connection to Southern Air Transport, other than it was started by some ex-SAT managers (as someone said: " whose lack of imagination prevented them from coming up with an original name").

N743SA is seen here in January 2001 at Amsterdam IAP, being refuelled for another cargo hauling flight.

During April 2003 Southern was busy getting out of Chapter 11 of the US bankruptcy protection; Southern had recently acquiered a 747-200 (with nose-loading capacity) and the PH-BUI (a Boeing 747-206B (SF/SUD) cn21111/276) had been bought from KLM.
The PH-BUI handover was planned on 17Apr2003 at Amsterdam IAP and a D-check by KLM was planned immediately afterwards (roll-out of the aircraft in Southern colors would be around the end of May. The new registration would be N746SA). The deal was cancelled while the PH-BUI was sitting in front of the hangar at Amsterdam IAP to enter the D-check.
Whether Southern will be able to restart operations again, remains to be seen.